The fundamental question behind this project addresses how interaction design for emerging computational technologies can allow us to create, experience, and share more complex forms of storytelling.

The PenLab Studio is led by Dr. Janet Murray, and explores the future of narrative forms in the new digital medium where TV converges with computational formats.

Using a student-created timeline authoring tool, I wrote a complex story that benefited from multi sequential storytelling. Meaning, the story has multiple endings, multiple variations, and allows the player to see more than one storyline.

I focused on telling the story of a young woman immigrating to the United States during the Obama to Trump administration transition.

Aside from creating the authoring tool, I did everything! I researched immigration stories of people coming to the United States from Central America. Using those real experiences, I wrote and rewrote, and rewrote a story with multiple paths & endings. I storyboarded the 7 versions of the story with the use of a chart & post-it notes. I tested the story on players and redesigned based on their feedback. Once the story was finetuned, I illustrated the icons and all imagery seen in the story.

I learned so much about the creative process with this project. I learned that when you’ve reached the darkest point of a project THAT’S time to push yourself and something good will happen. I learned to enjoy the messy process of creative work. I learned how to concisely write a story that has parallel endings and (hopefully) pulls an audience in.

While I greatly enjoyed this creative experience, I found that this format of storytelling doesn’t work for immigration. By the completion of my project, the story felt stereotypical which can lead to a dangerous avenue. I’d love to revisit this work in a different format.

We began the project by discussing storytelling methods: moral physics, rules of combination, narrative cause and effect, and parameterized 5 part narratives. The 5-part narrative was integral to this interactive narrative as it lends itself to multiple endings.

In addition to storytelling discussion, we analyzed a former student’s master’s project, “Reliving Last Night” as we would utilize the exact same authoring tool for our stories.

With a clear understanding of the scope of the semester-long project, I brainstormed potential stories that could benefit from variations and multiple endings. I landed on immigration as I am a first-generation American and I believe this topic is crucial to American culture & policy. My hope was to create a story to dispel the idea that immigrating to the United States is “an easy way out” as the journey itself is traumatizing.

The image below is the initial outline of the story. 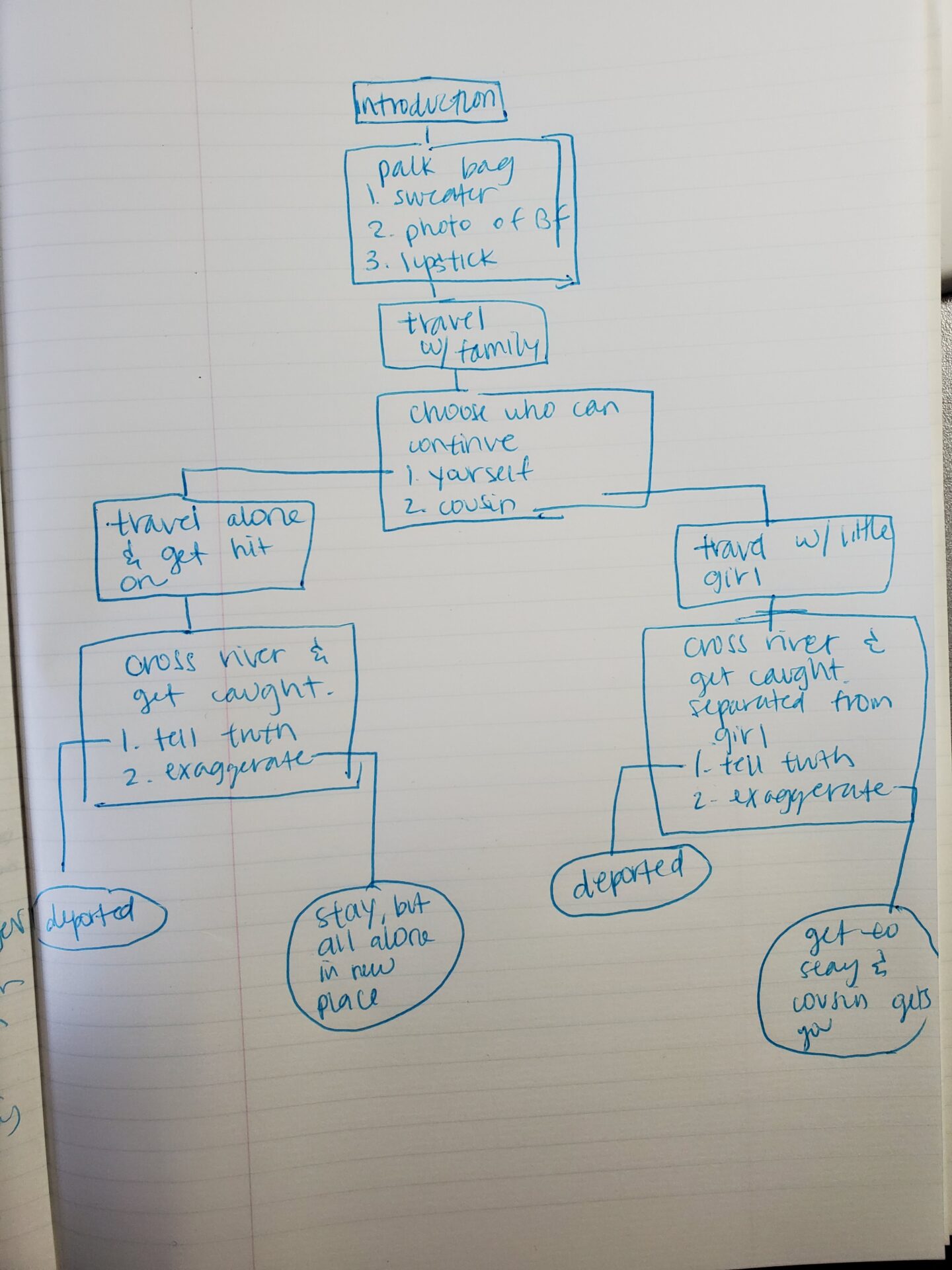 Using the interface from Reliving Last Night, I created a storyboard that fit within the interface’s structure. Further, I accomplished the goals per the assignment:

Below is the initial draft of the story structure based on the interface design. The blue boxes are narrative scenes, and the purple boxes are the choices. Each tile has a word or image to depict what will happen if clicked on (story or decision point). 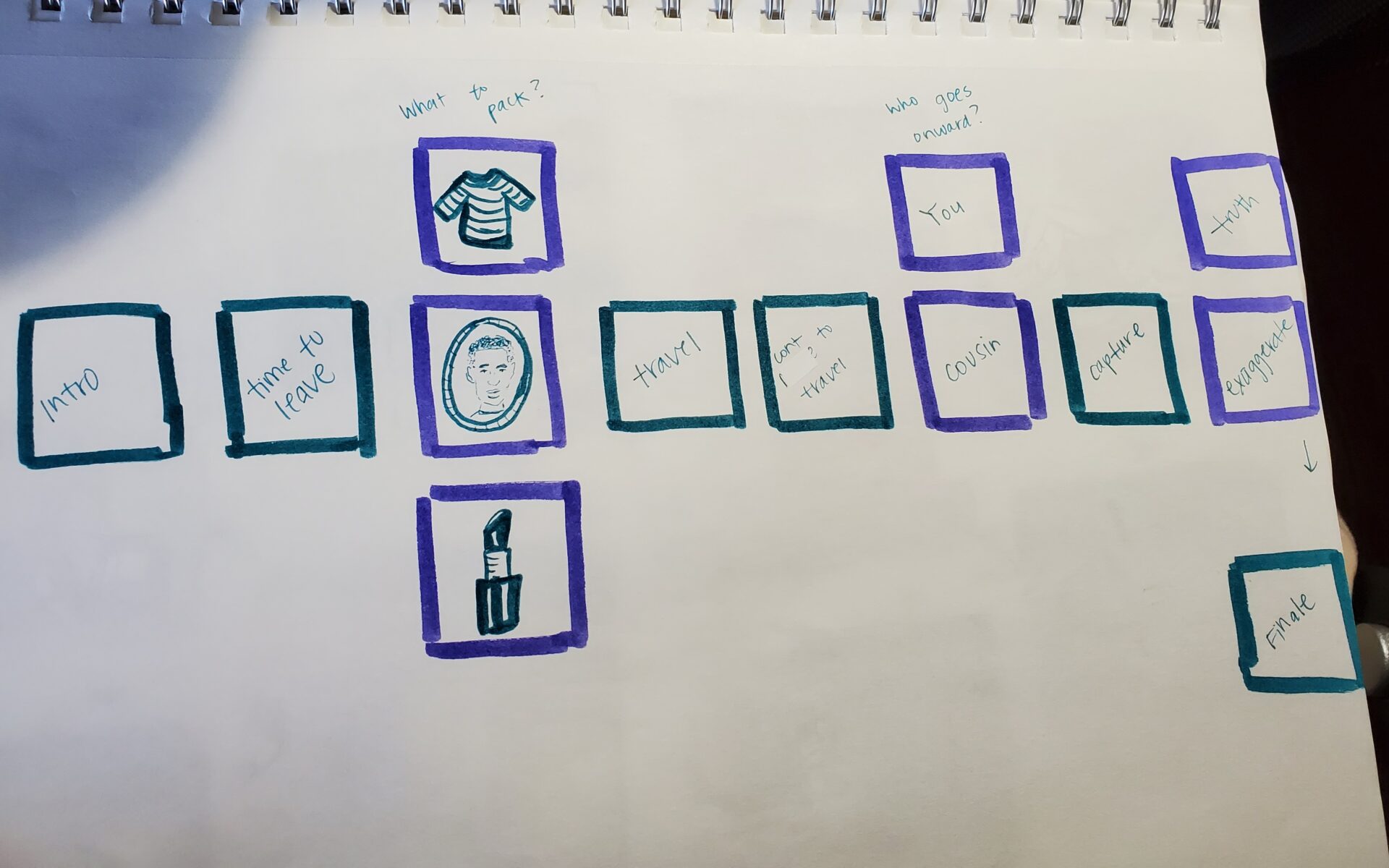 After organizing the structure of the story, I worked on the visual style of the narrative. Due to COVID 19, this class was entirely remote. Further, the project was individual to accommodate for the remote semester. As such, I turned to illustration as I have experience and am capable of completing on my own.

Considering the number of variations, multiple endings, and the complexity of the project I knew the illustration style needed to be: quick, minimal, and easy to read. Therefore I stuck with a limited color palette, a rough/sketch drawing, and a focus on facial expressions to quickly tell a story.

Below is a visual storyboard of the narrative complete with initial sketches that fit into the visual style. 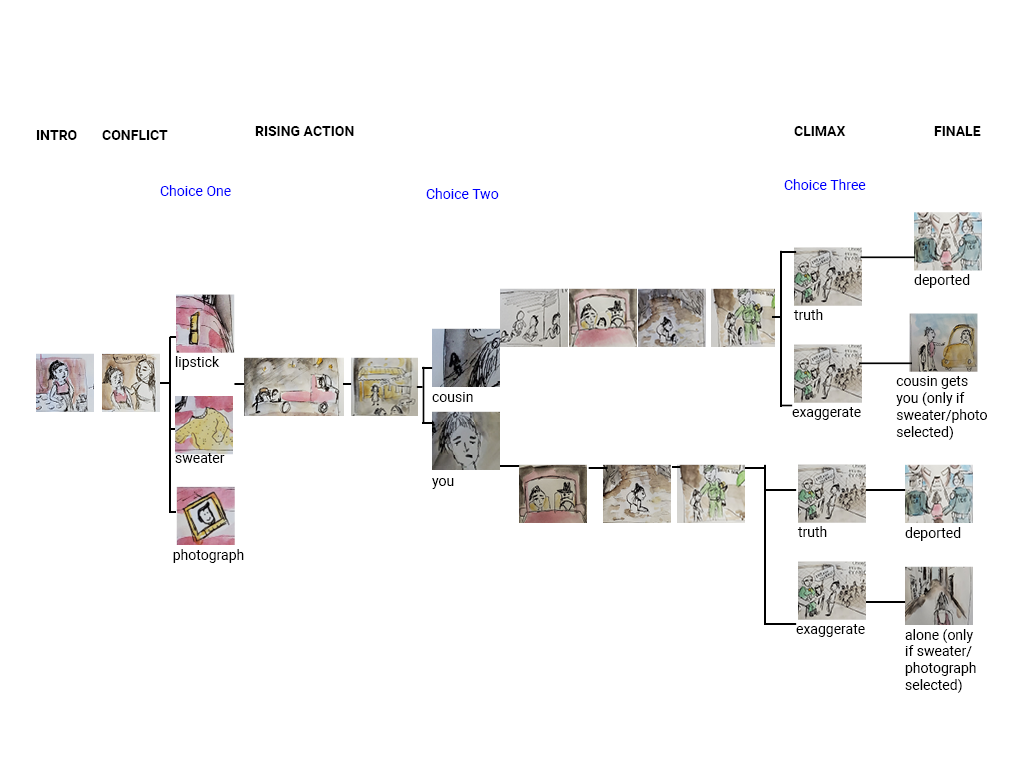 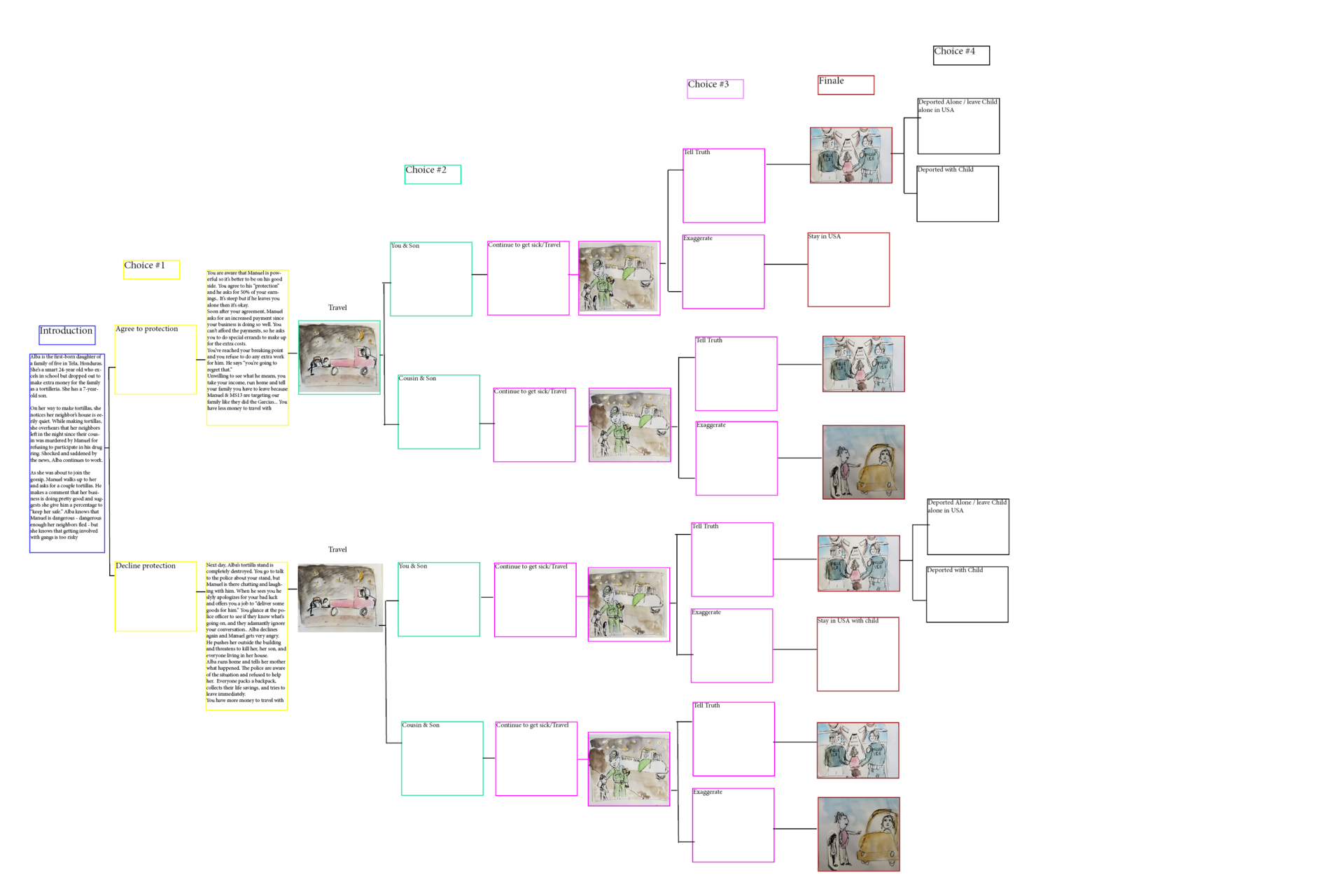 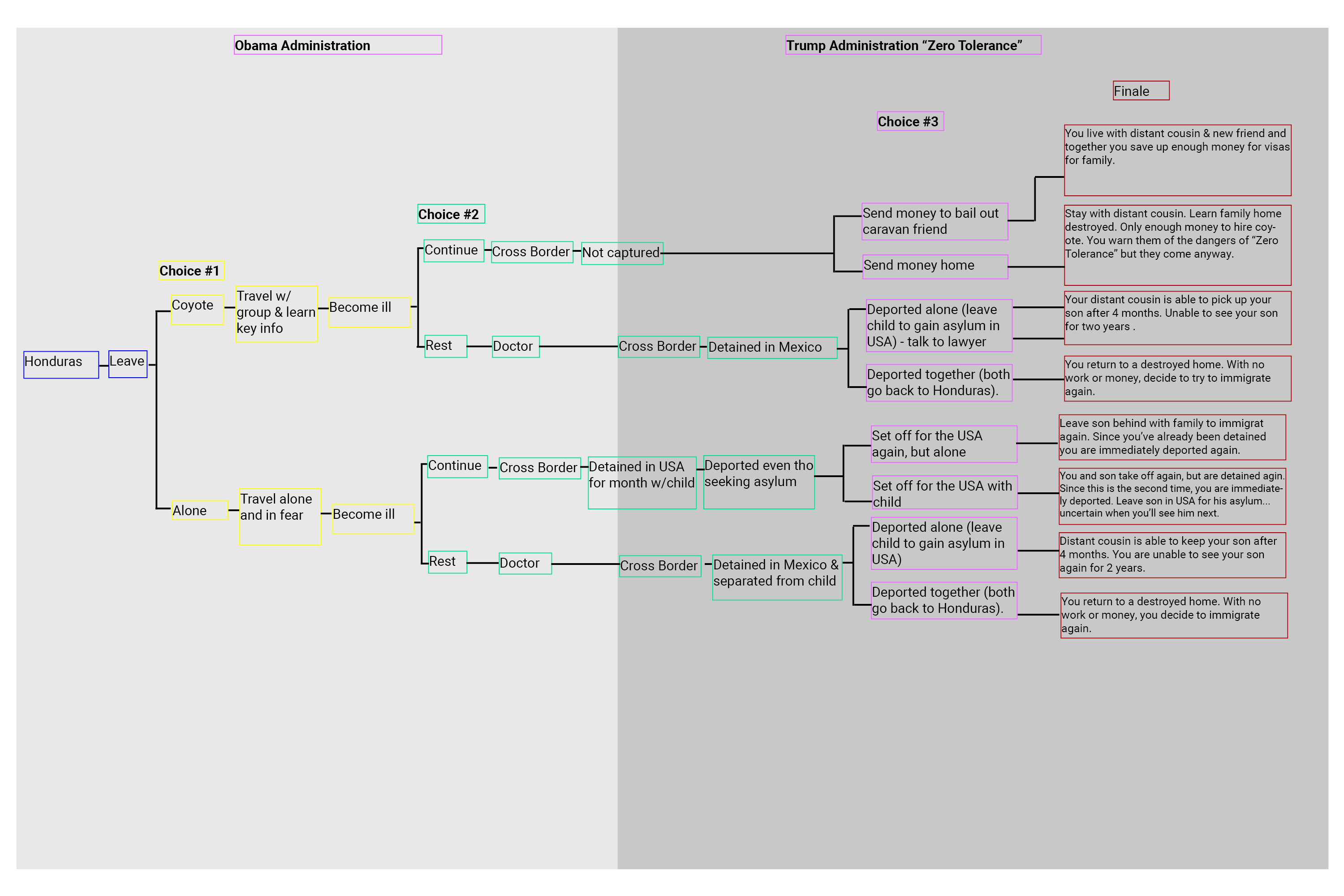 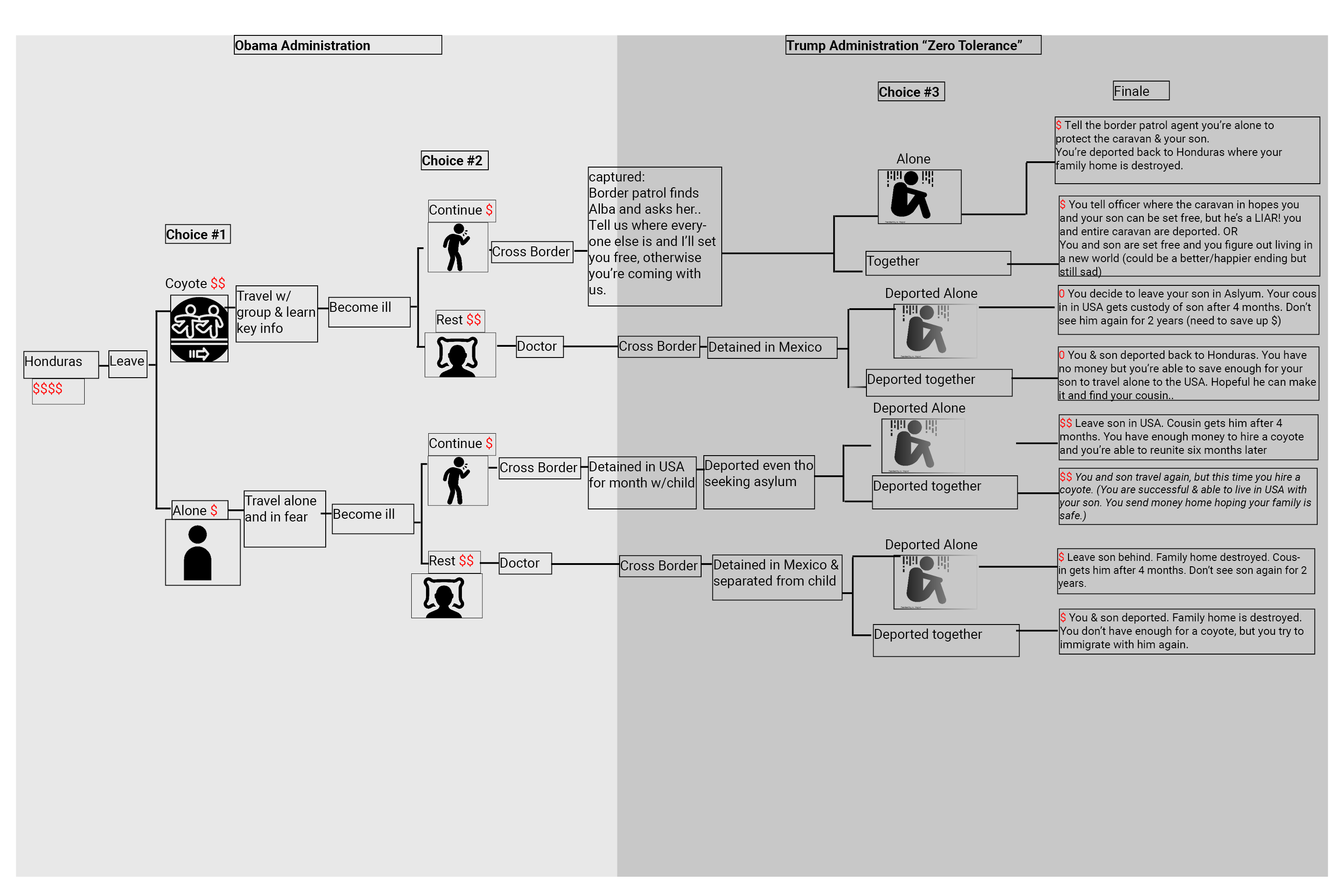 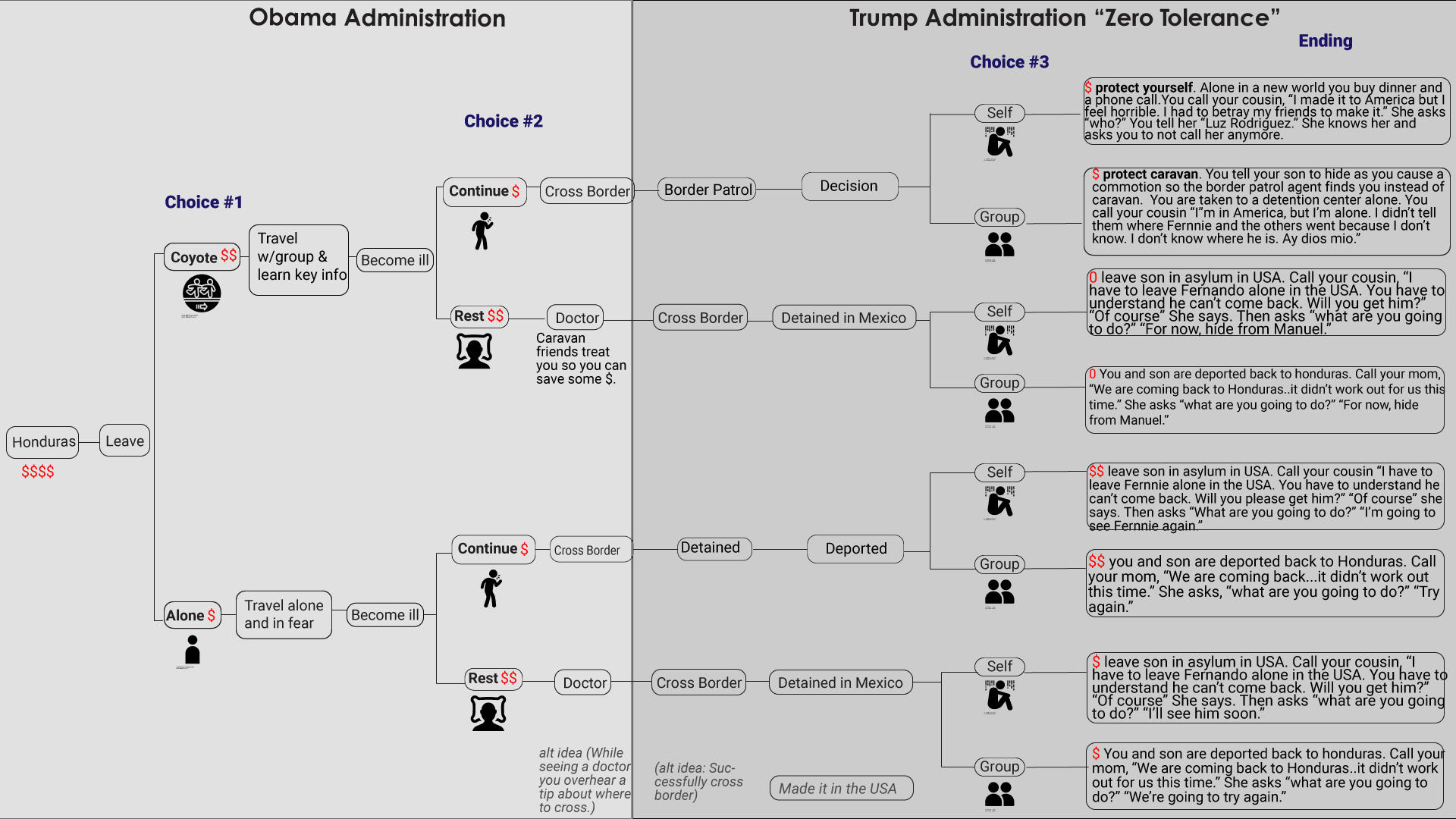